Today’s snowstorm can only mean one thing: Perfectly padded hills for tobogganing. If you’re a true Canadian who likes to embrace their inner child, you can’t wait to pull that old GT snow racer or sled out of the garage, fill your flask, and head to your favourite hill. We’ve compiled some of the most thrilling slopes for all you winter sport enthusiasts.

Do you have a favourite hill in Toronto? Let us know in the comments.

Just south of the Danfroth on Broadview, Riverdale Park East and West has some of the best views of downtown Toronto in the city. The hills are steep and there is plenty of room to share with fellow tobogganers. You’ll see every kind of vehicle from tubes and sleds to food trays.

The former village of Swansea also has a skating rink and a hockey pad, but Rennie Park has no fences around the rink, making 3am outdoor activities a real thing. It’s at Ellis and The Queensway, and the southern hills may just be one of winter’s prime tobogganing spots.

This park in Scarborough is 15.8 hectares big, with tons of hills perfect for gliding down. It’s right off of the 401, making it super easy to get to. It’s got a shelter, a children’s playground, and a picnic area (read: tons of snowy open space). The possibilities are endless. 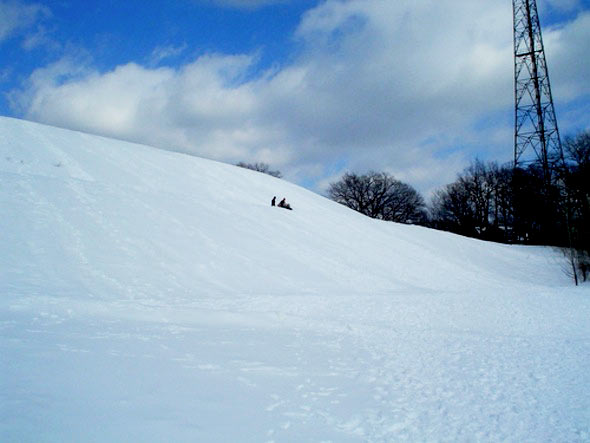 Located at St. Clair Avenue W. and Spadina, just north of Casa Loma, this is undoubtedly one of the steepest hills in Toronto. There are some gravel walkways and stairs to help with the ascend.

(Winter in Cedarvale Park: By Kiril Strax via Flickr)

If tobogganing hills were ski hills, Cedarvale Park brings the black diamond runs. The whole park is bordered by steep hills, and there’s a skating rink in the giant, diagonal space near Bathurst and St. Clair.

Former gravel quarry form the 1800’s makes for one of the best toboggan spots in the GTA. There are also two other respectable hills within walking distance: Bickford Park to the south, and Trinity Bellwoods even further south. 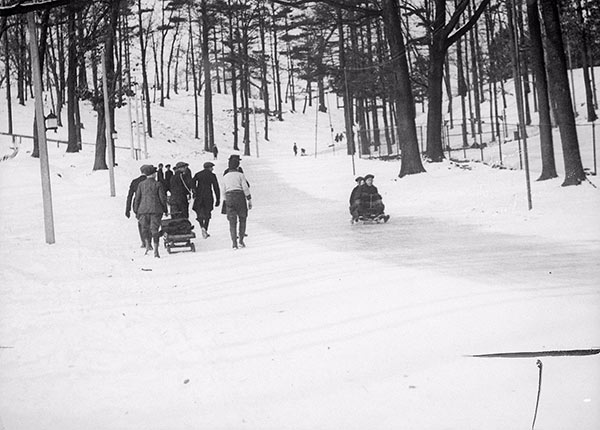 High Park has many options for the winter sport connoiseur. The most popular hill is just south of the Grenadier Restaurant, but can get crowded quickly. For those who are craving more of an adventure ride, try your luck off-roading but watch out for trees.

The slope next to the city run ski hill prohibits tobogganing but that doesn’t stop thrill-seeking Torontonians. Almost anyone that’s experienced this hill has a story about a broken GT snow racer. There is another (less steep and fun) hill on the other side of the park that is a “designated toboggan area.”

If you’re from the GTA, Major Oaks Park in Brampton is the place to be in winter. It’s nestled next to a subdivision, and the hills were pretty much made for tobogganing. It’s also close to Bramalea City Centre, which means you can fully take advantage of the mall food court for a lunch break.