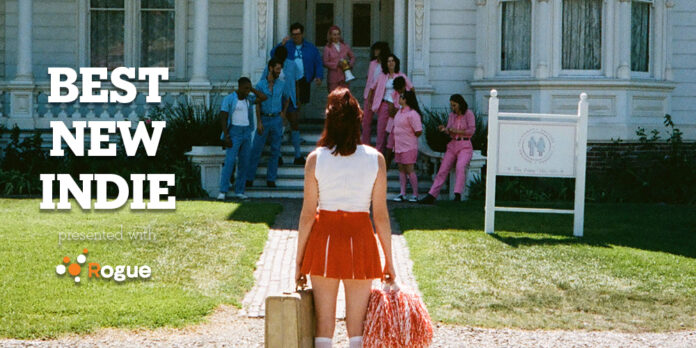 Check out this week’s Best New Indie below.

This Indie88 feature is presented in partnership with Go Rogue.

LA trio MUNA are back with a video for their new Phoebe Bridgers collaboration “Silk Chiffon.” “Silk Chiffon” marks MUNA’s first new music since they signed to Bridgers’ Saddest Factory label in May. The upbeat new single has an early 2000’s pop vibe, and comes packed with a danceable, sunny chorus. “Silk Chiffon” is “a song for kids to have their first gay kiss to,” guitarist and producer Naomi McPherson says. The accompanying video is inspired by the cult classic But I’m A Cheerleader.

Pearl Jam‘s Eddie Vedder has announced his new solo album, Earthling. As part of the announcement, he’s shared “Long Way” via Seattle Surf/Republic Records. Eddie Vedder created the song with producer Andrew Watt. With shining vocals and emotive instrumentals, “Long Way” is sure to move you. Today, he also announced a limited edition 7-inch vinyl featuring “Long Way” and the soon to be released “The Haves.”

SZA – “The Anonymous Ones”

SZA has shared a new single called “The Anonymous Ones.” The track comes from the soundtrack to the forthcoming Dear Evan Hansen film, which is an adaptation of the musical. According to Stereogum, the soundtrack also features songs from Finneas, Carrie Underwood, Dan + Shay, and more.

Lana Del Rey has shared a video for her new single, “Arcadia.” The track comes from Del Rey’s forthcoming album, Blue Banisters, which is out on October 22nd via UMG. “Arcadia” is an elegant ballad that sees Del Rey singing atop a muter piano. The stunning new video for the track sees Del Rey decked out in blue jeans and a cardigan as she sings along to the tune. Del Rey stands next to windows as sunlight pours in around her. As the clip progresses, Del Rey lies in front of a starry galaxy, floating through space.

Amyl And The Sniffers – “Hertz”

Melbourne punk outfit Amyl And The Sniffers have shared a cinematic video for their new single “Hertz.” The track comes from their new sophomore album, Comfort To Me. “Hertz” follows the release of “Guided By Angels” and “Security,” and follows their raucous trajectory. Frontwoman Amy Taylor delivers her signature wails atop gritty guitars, singing about wanting to escape. “Hertz” is “a daydream of wanting to go to the country/bush and see landscapes other than the city, go like four wheeling driving or getting sunburnt and having fresh air,” Taylor explains. “Repulsed by confinement kind of daydream.”

Toronto jazz fusion outfit BADBADNOTGOOD have shared a video for their new single, “Beside April.” The track comes from their forthcoming album, Talk Memory, out October 8th via XL Recordings. “Beside April” serves as the follow-up to the album’s lead single, “Signal from the Noise.” BADBADNOTGOOD wrote the new single with Brazilian composer Arthur Verocai, and it features drummer/producer Karriem Riggins. The accompanying Camille Summers-Valli-directed video was inspired by Eadweard Muybridger’s 1878 “Horse In Motion” series.

Dehd have shared a new Protomartyr remix of “Loner.” The new version of the track comes from Dehd’s forthcoming Flower of Devotion Remixed album. This Protomartyr remix follows the release of Lala Lala’s remix of “Desire.” Protomartyr add some surprisingly dancy twists to the track. On this version, the instrumentals take the lead as the gritty vocals fall to the background.

Sloppy Jane has signed to Phoebe Bridgers’ label Saddest Factory. In celebration of the announcement, they’ve shared a video for their new single “Party Anthem.” Sloppy Jane and Phoebe Bridgers go way back. In fact, Bridgers used to play bass in the band and frontwoman Haley Dahl has joined Bridgers on stage at many shows. Now, Dahl and co. will be joining Bridgers once again to release their new album, Madison, out on November 5th. Sloppy Jane recorded the album from inside of the Lost World Caverns in West Virginia. These caves added a distinct sound to the forthcoming project. This preview is a sweeping, orchestral tune that sets the tone for Madison.

Lillie West has shared her new song as Lala Lala, “Prove It.” The track comes from her forthcoming album, I Want The Door To Open, out on October 8th via Hardly Art. “Prove It” follows the previously released “Diver” and “Color Of The Pool.” This new tune is far more subtle, with soft guitars and ambient, processed vocals. “‘Prove It’ is a song about insatiable people and the idea of ‘good’ vs ‘bad,” West explains. “It’s about lack of control. Even though this song is accusatory, I relate to the person I’m talking to. I think sometimes when we criticize other people we’re also talking about ourselves.”
Listen to our Best New Indie playlist below!

The first trailer for ‘Tiger King 2’ is here