Billie Eilish performs ‘Happier Than Ever,’ punches Kimmel in the stomach on ‘Jimmy Kimmel Live!’ 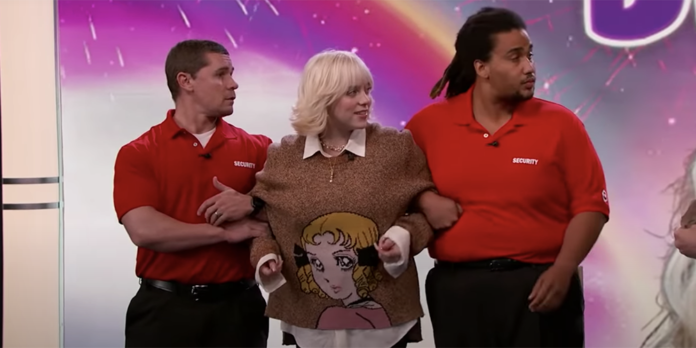 Billie Eilish took to Jimmy Kimmel Live! last night (October 13th) where she performed “Happier Than Ever” and (checks notes) punches Kimmel in the stomach.

Eilish teamed up with her brother Finneas and their live drummer for the performance of her recently released album’s title track. Taking to the rooftop of the Hollywood Roosevelt Hotel, the trio delivered a powerful performance of the anthemic song. During a memorable moment in the performance, Eilish wails, “I’d never treat me this shitty/ You made me hate this city.”

During the show, Eilish also crossed items off of her bucket list with Kimmel. In the segment, Eilish cut an audience member’s hair, was gifted a mouse, and even punched Kimmel in the stomach. The host let Eilish get some revenge for when he teased her about not knowing anything about Van Halen with the stomach punch.

Watch Eilish’s performance of “Happier Than Ever” and the Billie’s Bucket List segment on Jimmy Kimmel Live! below.

Elsewhere in the interview, Eilish talked about her Grammy-winning Bond song from No Time To Die. She said that long before getting to make the song, her and her brother had a Bond-related songwriting challenge.

“I knew all of them because I’ve loved Bond since forever and so has my entire family,” Eilish tells Kimmel. “Years before the Bond song, our song was going to be anything… was even a topic of discussion for us we would do it as a songwriting exercise, me and my brother.”

Wilco cover The Beatles’ ‘Dig A Pony,’ ‘Don’t Let Me Down’