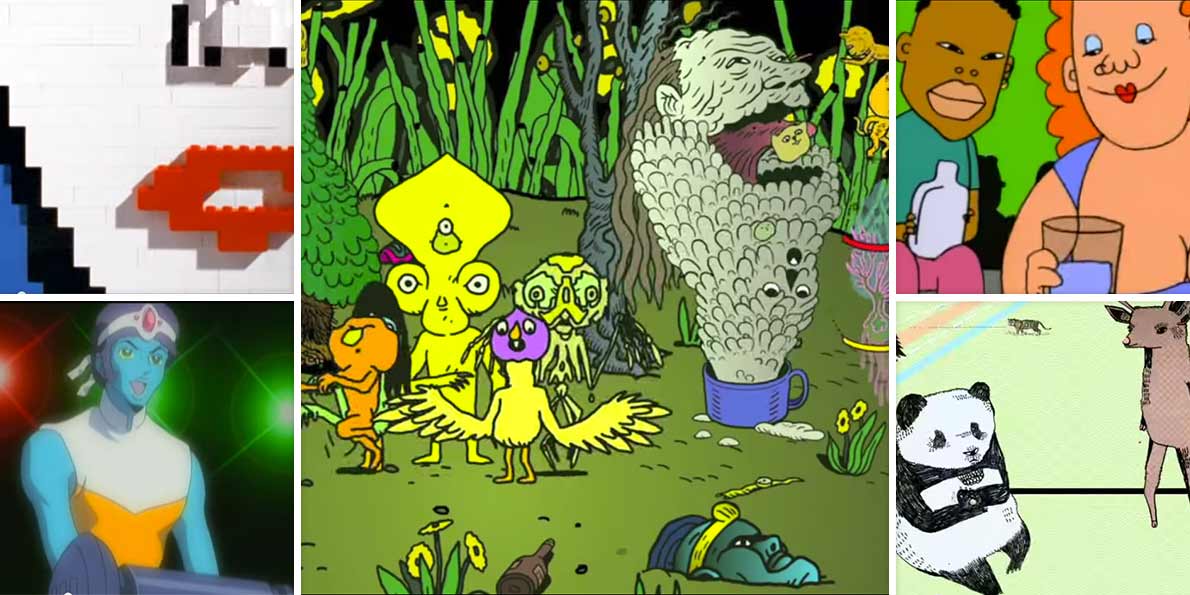 While it may not be the most creative way to make a music video, there is something tried and true about the standard issue, “performance video”. Like the behind the head guitar solo and the leather-panted front man, it’s a formula as old as MTV itself—cheap, artless, and oh so effective.

For artists willing to take some chances however, the animated music video can be a compelling alternative. Below are 9 of the most creative, memorable, and otherwise well-executed animated videos this side of Paula Abdul.

Note: there are no hybrids-videos here (sorry Aha)—these clips are pure, unadulterated animation. Enjoy the show!

Daft Punk – “One More Time”: Widely considered one of the top songs of the 2000s, “One More Time” also boasts one of the decade’s most unforgettable videos. Featuring scenes that would later form part of the exquisitely titled “Interstella 5555: The 5tory of the 5ecret 5tar 5ystem”, a 2003 Japanese anime film about a talented group of alien pop stars that are kidnapped from a neighboring galaxy by an evil corporation and forced to churn out anodyne hits, “One More Time” is Otaku-certified gold.


Junior Senior – “Move Your Feet”: Peaking at #3 on the UK charts, “Move Your Feet” was the Danish pop duo’s biggest hit. With its party-rapped verses and MJ-channeling chorus, the track has been a staple of indie dance parties for more than a decade. The accompanying video by art collective Shynola, which uses low-res pixel art to depict the band and their squirrel pal having fun, will have you pining for the days of TurboGrafx-16 (old people, y’all know what I’m talking about).


Casiotone for the Painfully Alone – “White Corolla”: What better way to examine the idea of infidelity than through animal limb-swapping? Wry, clever, and—like much of Casiotone’s best work—deeply melancholy, the video for “White Corolla” is a fitting match for its lo-fi narrative. That it culminates in one of the all-time best animated dance routines, is simply icing on the vegan, gluten-free cake.


Los Campesinos! – “We Throw Parties, You Throw Knives”: On, “We Throw Parties, You Throw Knives”, the debut single from 2007’s superb Sticking Fingers Into Sockets EP, the band strikes a delicate balance between charming Myspace-era indie pop and saccharine twee. The video though is nothing but net. Embracing the cheeky implied-violence of the track, the clip features an all-out war between little red army men cut-outs that’s as adorable as the band themselves.


Pearl Jam – “Do the Evolution”: Few music videos are as irrevocably tied to an audience’s appreciation of a song as Pearl Jam’s “Do the Evolution”. Equal parts exhilarating and terrifying, “Evolution” is a millennia-spanning look at the destructive nature of all living things that’s downright Hobbsian in scope.


Chad Vangaalen – “Peace on the Rise”: Not only does Chad Vangaalen assumedly play every instrument here, but the animation (evoking 1973 French stop-motion classic Fantastic Planet) is his as well. One of indie music’s most sought after visual artists (to say nothing of his remarkable musical output), Vangaalen has crafted vids for heavy hitters like J Mascis and Timber Timbre. Watch them all and never sleep again.


Gorillaz – “Clint Eastwood”: As the world’s most famous virtual band (all due respect to Prozak), Gorillaz have no shortage of great vids to choose from. Still. There’s something about the Dawn of the Dead references and dancing zombie gorillas here that’s hard to deny. Directed by acclaimed comic book artist Jamie Hewlett (with help from Pete Candeland), the video is—like Gorillaz themselves—fun, imaginative, and just a little bit trippy.


Honourable Mentions: Queens of the Stone Age – “Go with the Flow”, Kanye West – “Heartless”, Annuals – “Sore”, Air – “Sing Sang Sung”, Arctic Monkeys – “Crawling Back to You”, Les Savy Fav – “What Would Wolves Do”, Björk – “Wanderlust”, Anything by Prozak!