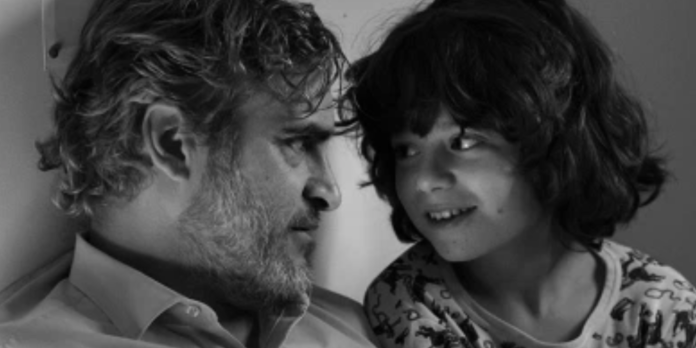 A24 has dropped the very first trailer for its forthcoming motion picture C’mon C’mon. Written and directed by Mike Mills, the black-and-white film is already seemingly rich in drama and emotion.

The clip, starring Joaquin Phoenix and youngster Woody Norman, offers several glimpses of the tender relationship between the two. Phoenix’s character Johnny recites poetic philosophies on the meaning of life as it flashes different scenes across the screen.

“To visit planet Earth, you’ll have to be born as a human child,” Phoenix narrates.

Continuing, “Over the years, you will try to make sense of that happy, sad, full, always-shifting life you are in. And when the time comes to return to your star, it may be hard to say goodbye to that strangely beautiful world.”

At the end of the clip, Norman’s character Jesse responds “You’re crying”.

Watch the trailer for C’mon C’mon below.

The film also stars Gaby Hoffman, Jaboukie Young-White, Scoot McNairy and Molly Webster. It will be Phoenix’s first movie since winning Best Actor Oscar for 2019’s Joker. The studio aims for a November release for the all black-and-white film but has not yet set a firm date.

Meanwhile, Phoenix has welcomed his first newborn baby with Rooney Mara. The two named their son River after the actor’s late older brother.

The Breckenridge Troll Keeps Watch Over The Colorado Forests

Cheap Teeth share their take on a summer anthem ‘What A Feeling, What A Day’