The popular taco chain La Carnita is under scrutiny for posting a photo on Instagram with a not-so-classy caption that references the recent lewd remarks from Donald Trump.

Let’s back it up. Unless you’ve been living under a rock, or have been lucky enough to avoid all things Trump this ongoing election season, you know that all the drama started when Trump reduced his lude comments to merely “locker room banter”. Of course, referencing to the recovered crass recording in which Donald Trump converses with Access Hollywood host Billy Bush, saying,

“I moved on her like a bitch, but I couldn’t get there, and she was married. Then all of a sudden I see her, she’s now got the big phony tits and everything.

Lovely. While most of the world was rightfully repulsed by the misogynist comments, Toronto’s La Carnita expressed some contrasting views with this Instagram post, made yesterday: 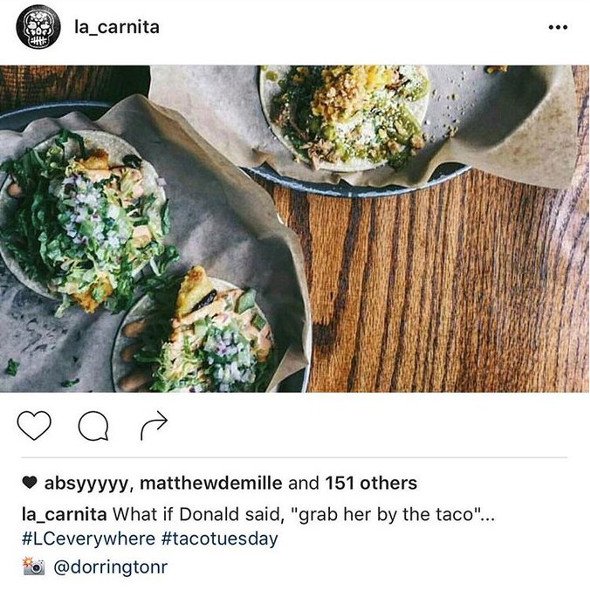 This obviously did not go over well. After a social media firestorm, the tasteless Instagram post was subsequently removed. This motion was followed up by apology a few hours later, via Twitter:

Tonight, we made a mistake. A big one. We used a caption that was dumb, rude, and insensitive.

but the damage had already been done.

It's little things like @la_carnita 's posts that belittle what is actually a frightening reality for young women living in the gta.

The post generated the resurfacing of several offensive Tweets regarding women made by the same taco joint.

Annnnnd just for kicks…here is their old washroom sign. Cool. You guys are cool. pic.twitter.com/GFVFAfc2gG

A few blatantly offensive tweets have since been deleted, like the one that referred to its servers as “tacHOES” back in February 2014. After the deleting spree, La Carnita then posted this apology on Facebook, signed by Andrew Richmond, an owner:

I wanted to personally address the concerns that have been raised about our company values. This isn't who we…

The restaurant, which is from the same owners as the much-loved ice cream joint, Sweet Jesus, as well as Good Fortune Bar, claimed they will donate proceeds from its Tuesday sales to a charity that has yet to be determined. It is also to be noted that there was no amount listed and the funds are coming from the customers they have previously offended.

Would be nice to see La Carnita make more than just an apology and donate to a women's shelter/orgs working to end violence against women.

Looks like their marketing team has their work cut out for them in the next couple of days. Maybe they can ask Trump for advice on how he handled the heavy backlash.

What are your opinions on the weak apology?