Most Overlooked Albums of 2016 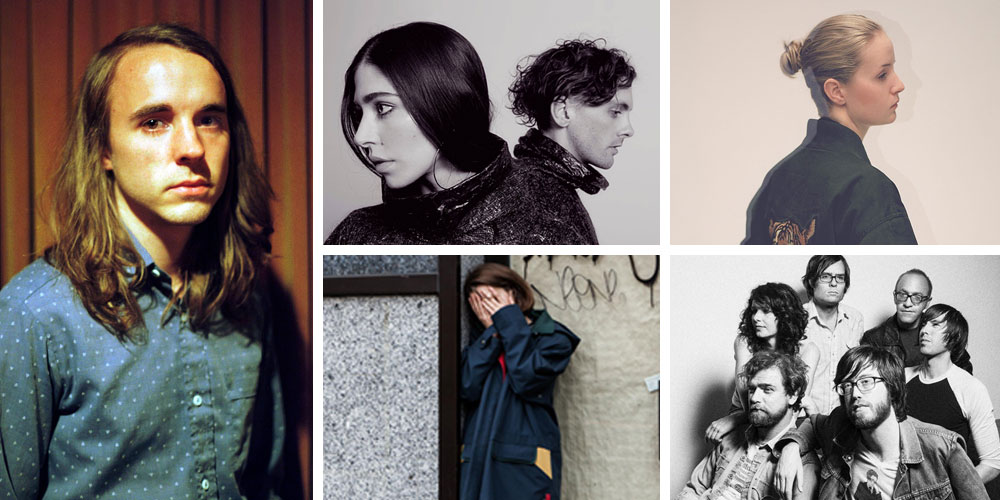 In a year that delivered new music from greats like Radiohead, A Tribe Called Quest, Bon Iver, and Kanye West, not to mention final efforts from all-timers like Leonard Cohen and David Bowie, sometimes it can be easy to overlook releases from lesser known talents.

From A to Z, here are 31 albums that may have slipped through the cracks, but certainly warrant some extra attention.

The golden boy of underground NYC hip-hop proves that he has not lost ability to innovate and create relevant art after twenty years in the game. The most word-tastic emcee of all-time doesn’t just spit gibberish, nor does he paint perfect pictures. His lyrics straddle between the abstract and the metaphorical but always come from a specific intention. His latest record is his most personal and ‘Aes’ handles all the production, which is very solid. – Paul Moran

Aurora – All My Demons Greeting Me as a Friend

Norwegian pop sensation has been making waves on the internet for some time now with several videos over 10 millions views and counting. Now, with a busy tour schedule she is finally crossing overseas and entering the hearts and minds of music lovers in North America. Her unique performance style is utterly compelling, the perfect accompaniment to her powerful vocals and solid band. – Paul Moran

Five years after sharing a dodgy black and white video covering Odd Future’s “Orange Juice” to YouTube, BADBADNOTGOOD have come commercially farther than one would expect for an instrumental lounge jazz band. While a critical success, their fourth studio effort, IV still hasn’t reeled the group in from the cursed label of an “experimental band,” despite an accumulation of rising collaborators including Sam Herring (Future Islands), Kaytranada, and Chalotte Day Wilson. – Dave Setton

On his ninth studio release Barnhart is treading in familiar territory with his unique brand of lo-fi psychedelic folk-rock. The Venezuelan singer-songwriter has had an enigmatic career with shades of brilliance in the mid-00s and his latest offering is definitely an underrated addition to his catalogue. – Paul Moran

Banks arrived this year with her second album The Altar. On this album, the alt-R&B artist took a much-needed risk, giving us something very different from her debut Goddess. We see a lot more of Banks in this sophomore album — her capabilities are much more evident and she’s taken a big step forward, further establishing her voice. – Dani Subject

Los Angeles-based quartet Bleached shed their familiar cloak of lo-fi 60s rock in favour of a more cleaned up approach for Welcome the Worms, and the evolution is a positive one. – Scott Lewis

The death of guitar-fueled indie rock has been greatly exaggerated. Will Toledo’s vocal delivery is unmistakable in its care-free, almost deadpan approach. Teens of Denial is equal parts an earnest and intimate look into navigating one’s 20s and a power chord trip through the annals of 90s indie rock inspiration. – Scott Lewis

Chairlift has been a much buzzed-about NYC indie rock band for over ten years, and in that time have evolved from pristine indie-pop to full out electro-pop on their latest release Moth. Looks like they are going out on a high note as the band recently announced their breakup. ☹ – Paul Moran

Cymbals Eat Guitars are very much Joseph D’Agostino’s band. While various personnel changes have taken place over the past five years and D’Agostino is the sole original member, Pretty Years offers a eclectic arrangement of songs. It’s got a bit of everything, from anthemic punk rock-inspired numbers like “Beam” to the beautiful synths of “Well” and the surprising danceable power of “Wish.” – Scott Lewis

After having performed together for nearly a decade, The Dirty Nil finally delivered their debut record with Higher Power. It captures the band’s energy perfectly, with just the right amount of polish on the production side. It’s aggressively loud, yet impressively melodic in chaotic spurts. If this Dundas, Ontario, three-piece dipped into Sonic Unyon’s archives to draw some inspiration from Kittens for “Lowlives” then you’ll hear no complaint from me. – Scott Lewis

El Perro Del Mar really nailed it with this album, returning for the first time since 2012’s Pale Fire. KoKoro plays with the instruments, using elements of the guzheng, a Chinese string instrument, as well as the Japanese shakuhachi flute. These elements in combination with Sarah Assbring’s whimsical vocals makes for a record of cultural exploration and celebration. – Danielle Subject

There’s a good reason Future PEERS made our Best New Bands of 2016 list. Under the mentorship of Broken Social Scene’s Kevin Drew and Charles Spearin with producer Shawn Everett they just released their first self-titled record that’s well worth the listen. PEERS’ brings a mix of sweltering electro rock music and I wouldn’t be surprised if Dan Boeckner was at the top of this band’s most influential artists. – Dave Setton

Jack Garrett is a multi-instrumentalist and alternative-R&B artist from the U.K. An ambitious music student early on in his life, Garratt learned to play any instrument he could get his hands on. He even went on to study music at university, working on recording a blues album along the way, before dropping out and exploring a new direction in his songwriting. His 2016 debut album Phase showcases elements of R&B, dubstep, gospel and soul brought together with a lush electronic sound.

Steve Gunn – Eyes on the Lines

Brooklyn-based singer-songwriter Steve Gunn may be familiar to many indie fans as a former guitarist in Kurt Vile’s band Violators. He’s carved his own path with his solo work over the past nine years, and 2016’s Eyes on the Line may be his most complete work yet. – Scott Lewis

Based out of Toronto, Holy Fuck’s Congrats is a visceral electronic experience. Full of grooves, heavy bass lines and elements pulled from a variety of different genres, this electronic noise rock band brought a more polished yet still explosive version of themselves with this record. – Danielle Subject

This seven-piece group are made up of members from two other existing groups — Child’s Play and Kashikoi. Thankfully, the morphing of the two have created a debut album that combines jazz, hip hop, and rap to create fourteen tracks that are groovy, full of great beats, and tons of intensity. – Danielle Subject

It’s no shock that Hamilton’s Jessy Lanza was shortlisted for a 2016 Polaris Prize for her enthralling album Oh No, but the only surprise is that more people aren’t talking about her. Sharing production responsibilities with Junior Boys’ Jeremy Greenspan, she’s stitched together one of the most clever and unique electronic records to date. – Dave Setton

It’s business as usual from this Brooklyn quartet with their sixth studio album. The band returned to its explosive, cymbal-crashing, erratic noise-punk sound for Devil Music, which is also their first self-released record since their 2010 debut Immaculada. – Scott Lewis

Will Sheff has been the driving force behind Okkervil River for the better part of two decades. After some deaths in Sheff’s family and a well earned disillusionment with the industry Sheff dismantled the band with the intentions of making a solo record. Instead, he reinvented his band with new members from the classical and jazz scenes to create a mature heartbreaking sound that drew comparisons to Nick Drake and breathed new life into an incredible and underrated career. – Paul Moran

Omni make 80s-inspired pop rock in the same vein of college rock icons The Feelies. The Atlanta trio served up 30 minutes of near perfection with Deluxe, which should be on the wishlist of anyone who considers his or herself a fan of alt-rock’s early-80s roots. – Scott Lewis

This New York-via-Texas quartet may have reached its creative peak with Human Performance, the band’s third formal full-length record. Frontman Andrew Savage’s lyrical play and fidgety delivery has drawn comparisons to The Velvet Underground. Those comparisons are on point. – Scott Lewis

Pinegrove’s Cardinal, the New Jersey band’s label debut for Run For Cover records, is eight songs of indie rock perfection. One of the year’s most pleasantly surprising records leans on Americana and the earnest appeal of emo legends like The Promise Ring and Braid. Our only complaint is we’re left wanting more…so how about it, Pinegrove? – Scott Lewis

The term “storyteller” gets thrown around a lot these days, but Andy Shauf is truly that. The Party is a collection of beautifully written tunes, that over-arches a story of real life characters in relatable scenarios. – Dave Setton

In Emily’s D+Evolution, Esperanza Spalding took a break from contemporary jazz to create an album equal parts funk and rock. Following an incident in 2011 when Spalding was cyber attacked by Beliebers for beating Bieber on the “Best New Artist” grammy, Spalding decided to take a creative break from the spotlight. Wanting to return to her roots and turn away from mainstream attention, Spalding channeled her inner Emily to create Emily’s D+Evolution, an album that is rich, free, and shows the dynamic force that Spalding is as an artist. – Danielle Subject

What makes Suuns’ Hold/Still so great is the Montreal quartet’s refusal to let its music become anything other than what it wants to be. It’s challenging blend of psychedelic synths and industrial noise makes for one of the year’s most unique records. – Scott Lewis

The Glowing Man reflects the precision and detail that Swans embed into their music. This experimental rock group does not disappoint, and with this album they managed to bring both the familiar and the new in regards to their music.

Thao & the Get Down Stay Down – A Man Alive

This is hands down one of the best albums of the year and has unfortunately been kept under wraps for the most part, aside from a few really positive reviews. Thao has created an album raw and full of emotion. Each song comes as a surprise to its listener — just when you think you’ve got it down, you get thrown completely off course. Aside from smokin’ guitar riffs and a masterful production, it’s the confessional element that underlies this album, combined with Thao’s attitude, that makes it great. –Danielle Subject

When Mike O’Neill of The Inbreds, Chris Murphy of Sloan, and Matt Murphy of The Super Friendz/Flashing Lights come together to play as TUNS, you better believe it sounds like Halifax circa mid- to-late 90s…and we’re all better for it. The attention to detail on the harmonizing on TUNS’ self-titled debut is unmatched. – Scott Lewis

Weaves is hard to put a label on — their music is fun, unique, and kind of quirky, and these traits are reflected in their latest self-titled album. For the full Weaves experience, try to catch them live.

Wilson’s EP came as a pleasant surprise this year. After being apart of The Wayo and being put on the map as a guest artist on BADBADNOTGOOD’s “In Your Eyes,” Wilson created something that shows her true potential as an artist. In CDW, Wilson smoothly incorporates electronica into an alt-R&B sound that is just brilliant. Already honing a mature sound right off the bat, it will be interesting to see where this artist brings her fans in the future. – Danielle Subject

The Brooklyn-based quartet blends experimental and heady indie-pop with elements of dance and world music to great effects. On their latest record they are back on form, continuing to push sonic boundaries while maintaining a large supply of dance-y hooks. And with song titles like Divine Simulacrum, it makes for a fun experience. – Paul Moran

Your First Listen: 16 songs you need to discover this week

Your First Listen: 11 songs you need to discover this week

5 things to blow your tax refund on

Your Guide To The Best Pasta In Toronto