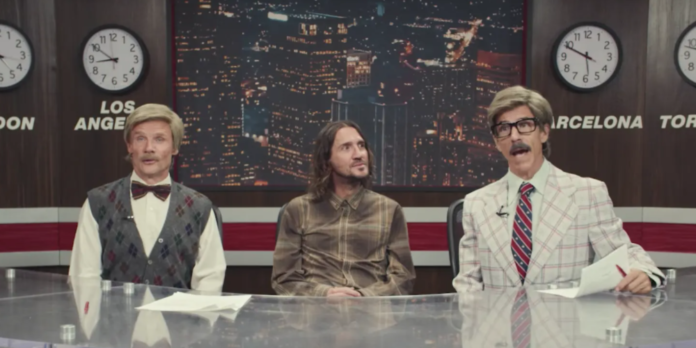 Red Hot Chili Peppers have announced their first tour since John Frusciante returned to the band. The tour was announced in a video, where the band pretended to be broadcasters for the fictional news station KHOT.

The clip sees Anthony Kiedis as Johnson Hammerswaddle and Flea as Todd the Squirrel who are joined by Chad Smith as weatherman Randy Raindrops. John Frusciante is later brought out as a guest to reveal that the world tour starts in June 2022 with U.S. dates beginning in July.

Exact dates are imminent but have not been revealed yet. Four analog clocks hang in the background of their video with one labeled “Toronto”, so a few Canadian dates are promising.

Watch the video announcement below.

Red Hot Chili Peppers announced John Frusciante’s return in December 2019. In February, only a couple months later Frusciante joined the band in what was their first live show together in nearly 13 years.

Frusciante has been an on and off again band member since 1989. His second record with RHCP was 1991’s Blood Sugar Sex Magik which sky-rocketed their status. Shortly after, he left the band, returning again in 1998, appearing on Californication, By the Way and Stadium Arcadium. Finally he departed again in 2009 until his return in 2019.

In early 2020, drummer Chad Smith revealed in an interview that they were writing a new record with Frusciante.

“I was given strict orders for this interview: ‘DON’T TALK ABOUT THE BAND,’” Smith explained before launching into a spiel about where they’re at. “But, yes, John is back in the band, and everyone knows that. We’re psyched. The festivals are the only shows booked. For now, we’ll mostly be concentrating on new songs and writing a new record. We’re all real excited to make new music.”