The most highly anticipated albums of 2022 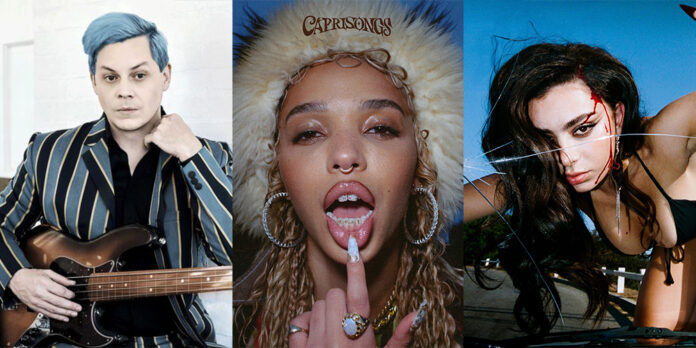 There were so many amazing releases in 2021, but we’re looking forward to some highly anticipated albums of 2022.

Jack White is quite ambitious this year, releasing Entering Heaven Alive just a few months after Fear of the Dawn.

Check out the most highly anticipated albums of 2022 below.

FKA twigs’ highly anticipated new mixtape, Caprisongs, is out on January 13th. The 17-song mixtape will include her recently released collaboration with the Weeknd, “Tears in the Club.” Fans can look forward to a whole slew of collaborations on Caprisongs with artists like Jorja Smith, Daniel Caesar, Shygirl, Pa Salieu, Rema, and more. “CAPRISONGS…” FKA twigs writes on Instagram. “It’s bronzer in the sink, alco pop on the side, a cherry lolly, apple juice when ur thirsty, friends in the park, your favourite person, that one sentence somebody said to you that changed everything, a club pre-game, your bestie who is always late but brings the most to the party, meeting a friend at the airport, just togetherness.”

The Lumineers’ new album, Brightside, serves as the folk band’s first new music in over two years. The nine-song collection will be a joyous, celebratory, and spontaneous body of work. Their longtime collaborator Simone Felice produced the album, which was mixed, engineered, and produced by David Baron. The Lumineers recorded the album over two sessions in winter and spring of 2021. Back in September, they announced the album alongside the release of its title track.

Aurora – The Gods We Can Touch

Ethereal Norwegian pop sensation Aurora is readying her forthcoming album, The Gods We Can Touch, out January 21st. The forthcoming album marks the follow-up to 2019’s A Different Kind of Human (Step 2). The new Aurora album is inspired by the Greek gods and the gods of the ancient world. “The spiritual door between the human and the gods is a very complicated thing,” Aurora explains. “In the right hands faith can become the most beautiful thing. Nurturing and warm. And in the wrong hands it can become a beacon of war and death.”

In September, Billy Talent officially announced their long awaited new album, Crisis of Faith. To accompany the announcement, Toronto’s rockers shared a new single “End of Me” featuring Weezer frontman Rivers Cuomo. Billy Talent’s upcoming album was produced by their own guitarist Ian D’Sa in the band’s Toronto studio. The forthcoming record will feature previous singles including “Forgiveness I + II”, “Reckless Paradise” and “I Beg to Differ (This Will Get Better)”.

Australian psych rockers King Gizzard & The Lizard Wizard are back to announce a new remix album, Butterfly 3001. “We’ve put off doing a remix album for a long time,” King Gizzard & The Lizard Wizard explain. “Maybe it was conscious, maybe it wasn’t. But it’s happening now. That’s not to say that Butterfly 3000 makes the most sense to remix. It might seem like the obvious one, but it’s not. Yes it’s electronic. But so is a fridge.” They’ve previewed the album with a dub version of “Shanghai” from The Scientist and a remix of “Neu Butterfly 3000” from Peaches.

Animal Collective’s new album Time Skiffs will mark their first record in six years. It follows 2016’s Painting With and it features previously released tracks “Walker” and “Prester John.” It’s set to feature nine new tunes from Avey Tare, Deakin, Geologist, and Panda Bear, mixed by Marta Salogni. The album “feels like listening in on a conversation among four old friends, just as it felt during their inchoate early days or their Strawberry Jam heyday,” according to a release.

Beloved art-rockers Alt-J are releasing their fourth album, The Dream in February. It features previously released singles “U&ME,” “Get Better,” and “Hard Drive Gold.” The Dream balances beauty and darkness. Both are “often seamlessly merging on the same track, a purposeful choice that pays dividends across the record.”

Big Thief – Dragon New Warm Mountain I Believe In You

Big Thief are really going above and beyond with their new album, Dragon New Warm Mountain I Believe In You, which clocks in at a whopping 20 tracks. The album was recorded in Upstate New York, Topanga Canyon, The Rocky Mountains, and Tucson, Arizona. Each location brought out a different sound from the band, which allowed them to explore new sonic territory. “One of the things that bonds us together as a band is pure magic,” Big Thief’s Adrianne Lenker explains.

FTHC marks Frank turner’s first new album since 2019’s No Man’s Land. It features previously released singles “Non Serviam” and “Haven’t Been Doing So Well.” “It’s exciting to finally get the new music I’ve been working on out into the world after the last miserable 18 months,” FrankTurner says. “It’s been a difficult time for a lot of people and their mental health, myself included, and discussing that openly is important to me, so this is a song about anxiety and the struggles that come with that.”

Beach House are releasing their new album, Once Twice Melody, in four parts. So far, we’ve gotten Chapter One and Chapter Two. Chapter Three is out on January 19th and the full album arrives on February 18th. The forthcoming album marks the first record Beach House produced entirely themselves. It also features a live string ensemble and arrangements from Dave Campbell. Alan Moulder mixed the album with Caesar Edmunds, Trevor Spencer, and Dave Fridmann.

Khruangbin and Leon Bridges are once again collaborating on Texas Moon, the follow-up to their debut EP, Texas Sun. This EP continues that journey. “Without joy, there can be no real perspective on sorrow,” the artists explain of the EP. “Without sunlight, all this rain keeps things from growing. How can you have the sun without the moon?” Upon the announcement, Khruangbin and Bridges released “B-Side.”

Charli XCX’s new album, Crash, is out on March 18th. On the record, Charli collaborated with some big names, including Rina Sawayama, A. G. Cook, the 1975’s George Daniel, and more. The press release says that she “possessed and persuaded” the stacked guest list. She did this using her “femme fatale powers and a multitude of dark spells and curses. They will all remain locked in my basement forever.” Crash features previously released singles “Good Ones” and her Caroline Polachek and Christine and the Queens collab, “New Shapes.”

Father John Misty – Chloë and the Next 20th Century

Father John Misty announced Chloë and the Next 20th Century with the release of “Funny Girl.” The record, which is out on April 8th, was recorded with Jonathan Wilson. It comes packed with lush strings, brass, and woodwinds performed by Dan Higgins and Wayne Bergeron. Arrangements are from Drew Erickson. It’s no wonder that the first preview of the album, “Funny Girl,” has more of a cinematic edge than the rest of Tillman’s repertoire.

Jack White – Fear of the Dawn

Jack White has not one, but two albums coming out in 2022. He’ll be releasing both Fear of the Dawn and Entering Heaven Alive. The first of the two, Fear of the Dawn, is out on April 8th via Third Man Records. The album features an electric version of “Taking Me Back.” It also features a track with Q-Tip called “Hi-De-Ho.”

Entering Heaven Alive follows later in the year on July 22nd. That record features an acoustic version of “Taking Me Back.” It also boasts songs like “I’ve Got You Surrounded (With My Love),” “Queen of the Bees” and “A Tree on Fire from Within.”

Paramore announce new album ‘This Is Why,’ share title track

15 TV Shows & Movies Filmed In Toronto (& Where They Were Filmed)