Imagine performing for dozens of strangers daily. Subjecting your talent in the open air in a city of 2.6 million. Come rain or shine and not only performing for passion, but also to pay your bills. This is the life of a street performer. It’s easy to forget how much respect these individuals deserve. After reading their stories and witnessing their raw talent here, we hope that you take a moment to toss an extra toonie their way. Or at the very least, stop and enjoy a moment with these hometown heroes.

Any true Torontonian knows of the incredible drummer often playing outside Yonge and Dundas, drumming complex jazz and blues beats quite effortlessly. But how many of you can put a name to this talent? Well, that man is none other than Peter Richards.

Growing up on a boat, Richards recalls travelling across the ocean as kid. In fact, he lived in many unique places such as England and Spain, and resided in Toronto throughout the 80s. After a brief stint as a computer programmer out west, he decided to move back to Toronto where he currently pursues busking full-time. Drumming for around 30 years now, Richards is known for his pleasant personality and brilliant musicianship. Next time you catch him drumming along the busy streets of Toronto, stop and take some time out of your day to appreciate his talent and say hello!

As Johnny Cash once said, “I fell down, down, down into the burning ring of fire.” Yet the Toronto-based Fire Guy does it on the regular. Brant Matthews has had a burning desire to entertain with fire for over 15 years now. He’s juggled, ate or breathed the fiery element in countries all over the world. Often seen drawing large crowds at Yonge-Dundas Square, it’s no sweat for Fire Guy since he knows he can “stand the heat”.

The words “tuition fund” on a large sign are often placed in front of this jazzy busker group of 7. The Sidewalk Crusaders have been covering hits from Michael Jackson to Nirvana and Queen. Even jazzing up the odd One Direction hit in their repertoire. Their alto-sax player, Peter Cavanagh, is a recent York University music grad and is also the creator of the group alongside 6 other young members: Bryan Yaremko, Mick Marshall, Mark Forster, Loui Koutsouflakis, Pisani and Mein. Check out this squad at Yonge and Bloor and other spots around the GTA. 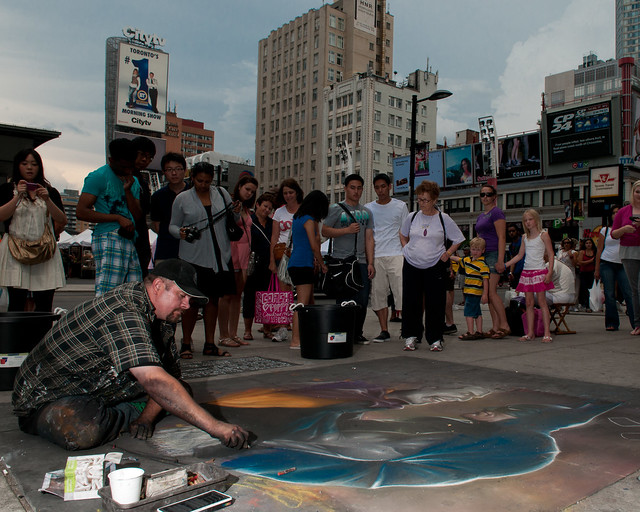 You’ve probably noticed the large chalk masterpieces on the sidewalk outside of the Eaton’s Centre, brilliantly detailed and even sometimes 6ft long. This sidewalk artwork is always different; from the odd Da Vinci painting, complex arrays of optical illusions, or even a rendering of your favourite superhero. These are usually the works of Chalkmaster Dave. His creations are comparable to that of a trained art scholar, yet remarkably he never pursued it academically. His craft is a none other than a result of painstaking dedication to thousands of hours of practice.

Following the release of The Dark Knight, you may remember a series of videos that went viral in Toronto a few years back. Well, comedian Alex Brovedani, aka Toronto Batman, is notorious for his antics as the grumbling crusader. Often shouting “SWEAR TO ME” or “MY PARENTS ARE DEAD”, his committed street performing comedy makes him a real gem to witness first-hand. Unfortunately, you may be seeing Toronto Batman’s antics a little less frequently. Brovedani is claiming to retire after the release of Suicide Squad (which was also filmed in Toronto) seen in his most recent video. But if evil rises again in Gotham City-ahem the GTA- we know the Toronto Batman will be there to make our streets a little safer.

Who are your favourite Toronto street performers? Let us know in the comments below.