You might know the nightspots and the tourist attractions of Toronto, but what about some of this city’s amazing public art installations? Big, bold, beautiful pieces-hidden in plain sight. Take a minute to stop and appreciate some of these iconic pieces scattered around town.

Did we miss your favourite? Let us know in the comments.

Have you ever stopped to actually look at this emblematic mural that hugs the beloved local concert venue? The legendary Toronto piece was done by artist Al Runt in 1993, who was actually a waiter at Lee’s at the time. In 2009, the monsters were torn down to make way for a Big Fat Burrito store front. But in 2010, Runt was commissioned to redo and restore the mural in all its glory once again.

THE RAINBOW @ THE DON VALLEY PARKWAY

You know that mysterious rainbow that gleams on the DVP? Well, the piece was dreamed up in 1972 by guerrilla mural artist “the Caretaker of Dreams” aka Berg Johnson, and has since been restored.

When the well-known street artist Elicser Elliott finished painting a tree on Queen West back in ‘99, he wanted to represent his crew, “HUG.” As an afterthought, he tagged “Me” underneath, and like magic, the landmark piece on Queen West was born.

Daniel Libeskind’s The Crystal first opened in 2007. The form is clad in 25 percent glass and 75 percent aluminum, sitting on top of a steel frame.

If you’re ever near Fort York, take a load off by stopping by this new-ish urban park called Canoe Landing Park. You can look out over Lake Ontario from the Big Red Canoe, designed in 2009 by Douglas Coupland, the same artist behind The Monument to the War of 1812 at Bathurst and Lakeshore.

THE AUDIENCE @ THE ROGERS CENTRE

The gold, loyal, larger than life fans that are perched above the northeast and northwest entrances, were done by Michael Snow in 1989 and has become a cornerstone of Sky Dome. 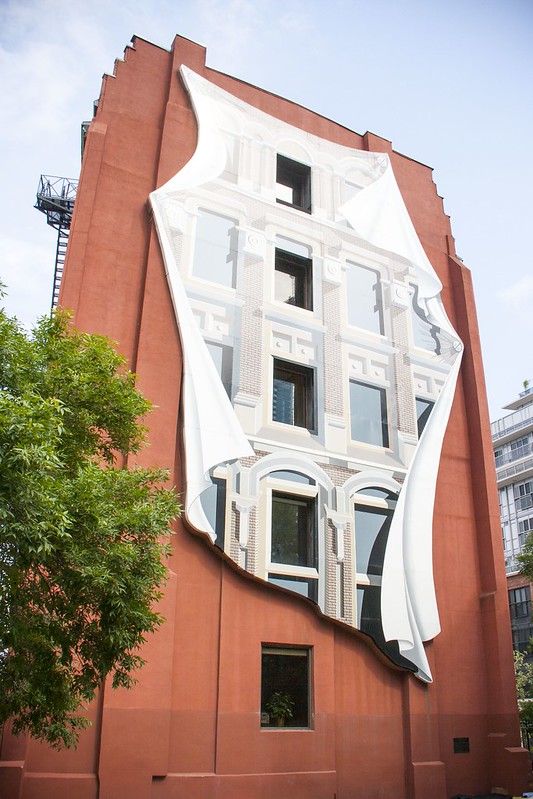 Canadian artist Derek Besant made the mural the trompe l’oeil mural on the back wall of the Gooderham Flatiron building on Wellington. It mirrors the Perkins Building, which is directly across the street.

Permanently parked on Augusta Ave. in Kensington Market, the Garden Car was started in 2006 by the Toronto group Streets Are For People. It’s real name is The Community Vehicular Reclamation Project, but Garden Car has a nicer ring to it.

(Photo by: Igor Bonifacic via Blog TO)

The walls off the Cameron House got a makeover in 2011, partially by artist Tom Dean. The east wall of the Cameron House features a giant mural saying “This Is Paradise” both right side up and upside down- a phrase that can also be found on a placard inside the bar.

Artist Michael Snow created the flock of geese above the atrium at the Eaton Centre that has become a staple at the downtown mall nearly 40 years ago. They can be found hanging from the ceiling all year round.

Richard Serra’s sculpture piece Shift has been threatened many times since it’s beginning in 1970. Shift finally became officially protected in 2013 under the Ontario Heritage Act.

HOW MUCH ART CAN YOU TAKE @ MOCCA

The “How Much Art Can You Take?” banner hangs in MOCCA courtyard at 952 Queen St. W by Trinity Bellwoods. Artist Jesse Harris created the piece in 2014 and it has been a favorite backdrop amongst Toronto Instagrams ever since.

(Main photo by: the camera is a toy. via Flickr)