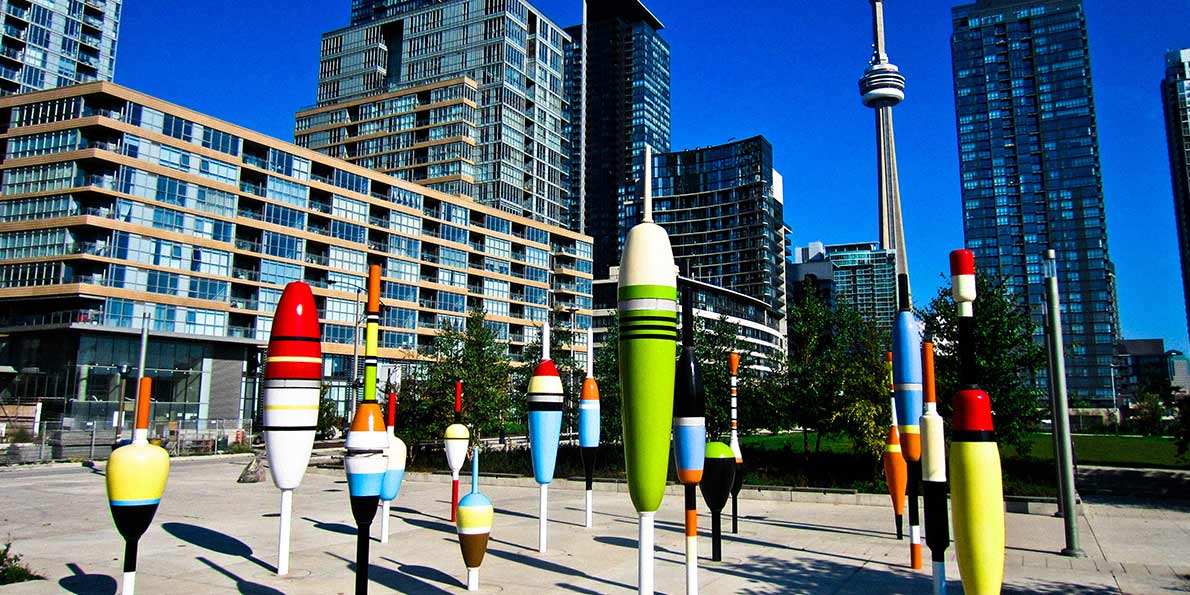 Toronto’s most unique parks and urban spaces are inventive, quiet patches that disrupt the city’s concrete sprawl to meditate on the sublime.

Designed by Canadian cultural multi-hyphenate Douglas Coupland in collaboration with urban planning firm Phillips Farevaag Smallenberg, Canoe Landing Park is packed with Canadiana that goes well beyond the namesake boat overlooking the Gardiner and Lake Ontario. It also features a gallery white beaver dam, a path system in tribute to Terry Fox, and a garden of oversized fishing bobbers.

The indoor vertical gardens incubating exotic plants at Cloud Gardens makes the small park an urban oasis, but it’s just part of the appeal. There’s also an outdoor waterfall, a wandering network of pathways, and an industrial sort of quilt monument to Toronto’s construction workers here.

THE GUILD PARK AND GARDENS

Before it was one of the film locations in Drake’s “Headlines” video, the Guild Park and Gardens (formerly Guildwood Park) was the site of an artist commune. Today it’s still one of the more curious spaces along the Scarborough Bluffs, home to nature trails and a sculpture garden collecting columns from the old Bank of Canada beside concrete and remains from Toronto’s first skyscraper.

We’ve featured Ireland Park in lists before, but it seems like a shame not to mention it here. Featuring ghostly sculptures and other memorials dedicated to the memory of Irish refugees that arrived in Toronto in 1847 after fleeing their country’s famine, it also offers one of the most interesting views of the Toronto skyline.

‘THE PASTURE’ AT TD CENTRE

Surrounded by office towers in a small meadow designed by Mies va der Rohe at the base of the Toronto-Dominion Centre in the Financial District, Joe Fafard’s bronze cow statues out to pasture are surely the Zen mascots to many a suit on a busy work day.

All spirals, reverberations and whismy, the Toronto Music Garden is a landscaping tribute to the music of Johann Sebastian Bach and yet another reason to visit the waterfront.

A welcome reinvention of a former waterfront eyesore, situated below the overpasses of Adelaide Street, Eastern Avenue, and Richmond Street in Toronto’s West Don Lands neightbourhood, Underpass Park is home to a skatepark, basketball courts, a playground, vibrant street art, and an expansive overhead installation of 57 mirrored octagonal plates.

Ontario’s proof of vaccination passport: What you need to know

A House Haunted by Mannequins? The Bizarre Story of the John Lawson House